Will Jiang of N5Capital: 8-year Cycle Theory of Early-state Investment 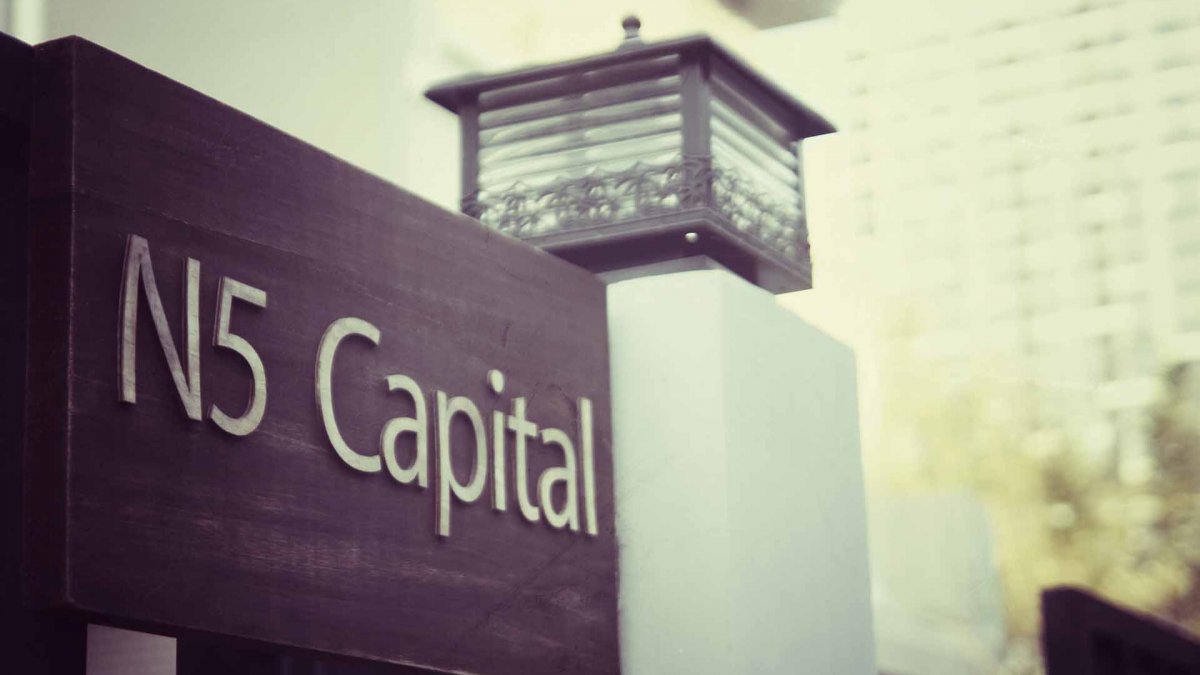 Beixincang Alley, 628 meters long, is located at the west side of Dongzhimen Overpass. Walking to the second green iron door in the alley, you can see a bronze placard written with “N5Capital”. Pushing open the gate and walking further, neglecting the empty security room and a parking lot covered by weeds, you will be surprised to find two rows of modern villa nearby the East Second Ring Road of Beijing, a place where each inch of the land worth an ounce of gold.

Following a sign, you will enter one villa. At the entrance of the villa is placed an INMOTION SCV. Passing by the front desk, you can see a dining room and a small garden. On the left of the dining room is the stairways to the offices on the second floor, and on the right, there is a meeting room. At this meeting room, the CYzone journalist met with Will Jiang, a partner of N5Capital. (Partner of N5Capital Will Jiang)

Founded in May 2013, N5Capital is currently managing two phases of RMB fund and one phase of USD fund, and it focuses on Pre-A round and Series A round investment. In the past two years, it has invested in more than 30 Internet companies, including TalkingData, INMOTION, Zebra Kingdom, Che300, Mocha, Maizi Edu and Viva Video. As its office is located in an extremely serene place in this tumultuous city, N5Capital’s fund is characterized by a unique feature. It has been persisting in investment in mobile Internet at the pace of one investment each month. In addition, it has been focusing on early-state investment and long-term high ROI. The two phases of RMB fund totals RMB1B, with a term of 10 years. The company has been emphasizing impact. It tries to be a major investor in each project, and its investment proportion must be higher than 20%.

“We want to be a focused and inheritable fund.” explained Will Jiang to CYzone.

In 2013, China’s financing environment was gloomy. IPO of China Concepts Stock was suspended. The listing of Facebook was thwarted. Mobile Internet was not considered to have a positive prospect. But Will Jiang believed that the development of the Internet has a cycle between 8 and 10 years. In the 15 years since 1998, the field of the Internet has experienced two waves of revolution: portal and the transformation of the traditional industry by the virtual economy and the Internet. With the increase of the penetration rate of the broadband, various Internet giants have emerged. It’s not sensible to engage in the Internet businesses any longer. However, in the field of mobile Internet, 3G and 4G network as well as the smart phone have been popularized. The year 2013 marked the first year of mobile Internet. In the emerging market in which the mobile Internet is revolutionizing the traditional industries, the cycle has just begun. “We will invest in the 8-year cycle.”

In the eyes of Will Jiang, “8 years” contains a miraculous number. It’s not simply related to politics and economic cycle. It has the connotations of inheritance.

The investment team of N5Capital covers three age brackets. There is an 8-year difference between each age bracket. First-tier investment manager can make final decision on the project and the distribution mechanism tilts toward him. A strict rotation mechanism must be established. “Because it’s easier to become an outstanding investor than an outstanding fund manager. The latter requires comprehensive experience and knowledge. After 8 years, we will withdraw. They will become partners and the fund will belong to them,” explained Will Jiang. According to Will Jiang, it’s very difficult for the early-stage institutions to invest in angel-stage projects, because angel investment becomes increasingly empirical. 80% of the projects rely on human judgment. “It’s difficult for me to make empirical judgment. Our investment is basically based on the understanding of the traffic, sales, market, business model, gross profit and what difference the Internet can make. For the entrepreneurs, we do not like eloquently talking about the concepts. We prefer sharing pragmatic experience and teach them how to become mature entrepreneurs”.

Therefore, the three funds of N5Capital mainly invest in projects in Pre-A round and Series A round stage, and each fund invests in about 30 projects. In addition, two angel funds have been incubated, and N5Capital Yuanhang Angel Fund has been established, which is overseen by N5Capital partner Zhiyong Zhang.

“Impact does not mean only providing help. The process of entrepreneurship should avoid too many different opinions. It relies on the judgment of the entrepreneurs themselves. The real impact means that I hold sufficiently high proportion of shares in each project and the proportion must be above 20%,” said Will Jiang.

The reasons are as follows: “On the one hand, I need to gain sufficient ROI and I need to invest the limited fund in the field that can create value. On the other hand, it’s pointless talking about valuation in the early stage. The fund only cares about how much money you need. This is a process of two-way selection.”

Specifically speaking, N5Capital will adjust its tactic every three months according to the situation of the first-tier market. However, “I will try to find the most resolute entrepreneur in the industry. I will invest when others dare not. When all people are fighting for it, I will slow down my steps.”

In the first half of this year, N5Capital invested in 5 start-up projects. Last year, when Internet finance and O2O concept went viral, N5Capital only invested one project in each field.

On the other hand, currently, half of the 22 persons on the team of N5Capital are first-tier investment managers and the rest are responsible for post-investment management. Four personnel do finance-related work. “With such a configuration, I hope to tell the entrepreneur that our investment is to verify whether what you’re doing now can capture the pain point of the users, whether the scenario fits in well with the method of user experience and whether business model is well defined and generates gross profit. Do not frantically burn cash. Do not spend more than the valuation. Do not give up great rights and interest to pursue valuation. In the early stage, survival is of utmost importance. Time is the best weapon.” (In the past two years, N5Capital is extremely low-keyed. In the words of Will Jiang, “It’s not necessary to be of high profile in entrepreneurship.”)

In the past two years, N5Capital has invested in around 40 companies in the fields of big data, cars, housing, online tourism, mobile E-business, culture and entertainment. Of which, N5Capital’s first investment project TalkingData has brought more than 40 times of ROI. “By far, everything goes well. But ROI is meaningless at the present,” Will Jiang told CYzone.

In the beginning, Will Jiang listed 10 vertical fields, including automobile, finance, real estate, entertainment, health, education, tourism, big data, E-business and home. According to the investment principle of N5Capital, scattering will help reduce risks, so it will not invest more than 30% in one field.

Specifically speaking, in the field of Internet finance, N5Capital has only invested in one company that engages in rent installment, Zebra Kingdom. In the eyes of Will Jiang, the biggest problem of Internet finance is that once systemic shortage of cash occurs, no platform can afford such a risk. For the specific consequence, please refer to 2008 financial crisis. N5Capital thinks rent installment is reasonable. In addition, it belongs to scenario-based consumption. It’s not a mere financial industry any more. It constitutes a breach to have a presence in the real estate industry.

Secondly, as to O2O, Will Jiang believes that most of the industries are not suitable for providing door-to-door services. The purpose of the approach of Internet is to standardize the services. However, most of the services can hardly be standardized and cannot be fully presented by the Internet. When the Internet cannot meet the needs of different users, the ultimate result is that the users would lose experience and leave. If the scenario-based consumption is not a rigid demand, and if the scenario has been fully tackled, it’s not reasonable to reconstruct the scenario.

Take car maintenance as an example. Last year, more than 30 similar companies emerged. “There is no difference between them. What they are competing against each is financing capacity. As an investment institution, it’s hard to evaluate a company’s financing capacity. Especially when the company is listed, it will be plunged into greater difficulty if no one would buy its products. The biggest difference between the private fund market and second-tier market is that the valuation in the private fund market can be established by a singer investor, while the valuation on the second-tier market is determined by 51% of the investors,” said Will Jiang.

Therefore, in the field of cars, N5Capital focuses on investing in transaction-related and technology companies. It has invested in 5 such companies, including Che300, Che101, Che3bao, Zhong’an Tianchi, and INMOTION.

Currently, N5Capital is paying greater attention to big data, education, health, and auto, and it plans to establish a big-data-related fund in the second half of this year in conjunction with TalkingData, the first investment project of N5Capital and a company specializing in big data, in order to invest in some fields where data can help improve productivity, such as medical and financial companies.